For my last three T-34s that I had on hand, I decided to use them to do some alternate vehicles.  I produced one OT-34 flamethrower tank (signified by having a fifth barrel on the back...just for table recognition), a T-34 ARV (armour recovery vehicle), and a Forward HQ character in a T-34/43. 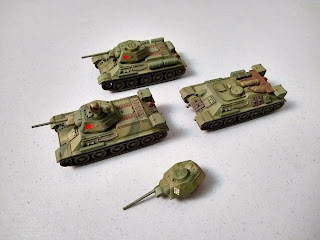 The last three T-34's I'll be doing for a bit.  I have conversion bits to make some T-34/85's...but I may also just get a separate box so I have a proper wave of T-34's at some point.  The spare turret is to replace the Forward HQ when he's not being used. 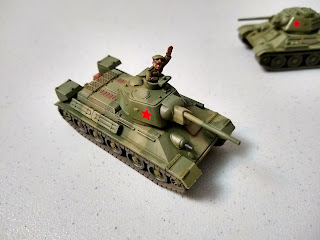 Commanders always wave or point.  It is the rule. 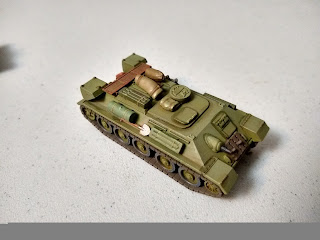 There is no official ARV pattern for the T-34...so I simply bashed together a bunch of junk, similar to what I've seen in photos.  I really wish I had some spare road wheels or drive sprockets but my "spare junk" pile for WW2 tanks is very minimal right now.